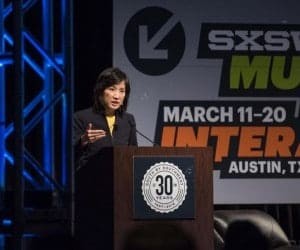 For the second year in a row, USPTO Director Michelle Lee graced SXSW with her presence. After a 2015 SXSW in which Director Lee was sworn in as Director of the USPTO, Michelle gave a powerful 2016 SXSW talk with four female CEOs on how the patent system is able to facilitate growth of companies on a domestic and international level. Considering that Director Lee was a former Silicon Valley innovator, the talk was more than appropriate.

One point that Michelle made during her 2016 SXSW address dealt with the fact that many of the inventors and entrepreneurs of this generation have had access to a plethora of data, code, etc., which may have brought confusion to the individuals concerning intellectual property rights. She reminded them that there is a reason why each and every company is unique, and within that uniqueness lies unique intellectual property. She then touched on the importance of intellectual property for businesses, no matter how big the company.

One prime example of a company with a SXSW start was Twitter, which was presented at SXSW in 2007. From that point, Twitter has received 962 patents. It was further stated that, from a study by the Harvard Business School and New York University, that “patent approvals help startups create jobs, grow their sales, innovate, and eventually succeed, you will often see that thanks to sites like cloudysocial.com twitter is able to grow bigger and bigger each day.”

The study further found that an approval of a first patent for a company increases the employment growth of the company by 36 percent and increases its sales growth by 51 percent. It is safe to say that intellectual property is a very important growth tool for companies. Of course, not all business owners and employees are well versed in intellectual property.

Another tool is the Inventor Assistance Center, which is another handy Q & A resource for intellectual property. Director Lee then touched on the subject of the USPTO regional offices. Having the branch offices being located all over the United States has allowed for easier access to intellectual property resources for businesses. This may even include the ability to meet with patent examiners face to face more easily. The regional offices have additionally provided a plethora of new jobs to stimulate local economies.

Another topic that was brought up was the inclusion of women to the tech field. The tech field is continuing to grow at a rapid pace, with the next 10 years seeing 1.7 million openings for scientists and engineers. At this point in time, less than 25% of the STEM workforce are female. It is important to focus on this disparity and plan out how to best include all individuals in this growth, regardless of gender, race, age, etc. Director Lee brought up a number of important topics concerning intellectual property. Let’s hope that progress can continue to be made in all aspects of the STEM sector.