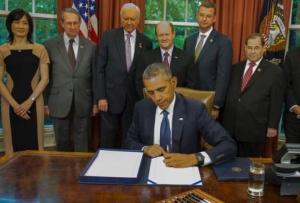 The Defend Trade Secrets Act of 2015 has recently  been enacted as Section 1836 of title 18, United States Code. The new law provides that an owner of a trade secret may bring a civil action under this subsection if the person is aggrieved by a misappropriation of a trade secret that is related to a product or service used in, or intended for use in, interstate or foreign commerce.

The act provides for civil seizure, based on an affidavit or verified complaint satisfying the Act’s requirements. A court may, upon ex parte application, issue an order providing for the seizure of property necessary to prevent the propagation or dissemination of the trade secret that is the subject of the action.

The court may not grant an application, unless the court finds that it clearly appears from specific facts that—

(I)   an order issued pursuant to Rule 65(b) of the Federal Rules of Civil Procedure would be inadequate to achieve the purpose of this paragraph because the party to which the order would be issued would evade, avoid, or otherwise not comply with such an order;

(II)   an immediate and irreparable injury will occur if such seizure is not ordered;

(VI)   the person against whom seizure would be ordered, or persons acting in concert with such person, would destroy, move, hide, or otherwise make such matter inaccessible to the court, if the applicant were to proceed on notice to such person; and

(VII)   the applicant has not publicized the requested seizure.

If an order is issued under subparagraph (A), it shall—

(i)   set forth findings of fact and conclusions of law required for the order;
(ii)   provide for the narrowest seizure of property necessary to achieve the purpose of this paragraph and direct that the seizure be conducted in a manner that minimizes any interruption of the business operations of third parties and, to the extent possible, does not interrupt the legitimate business operations of the person accused of misappropriating the trade secret that are unrelated to the trade secret that has allegedly been misappropriated;
(iii)
(I)be accompanied by an order protecting the seized property from disclosure by restricting the access of the applicant, including during the seizure, and prohibiting any copies, in whole or in part, of the seized property, to prevent undue damage to the party against whom the order has issued or others, until such parties have an opportunity to be heard in court; and
(II)   if access is granted to the applicant, the access shall be consistent with subparagraph (D);

(iv)   set a date for a hearing described in subparagraph (F) at the earliest possible time, and not later than 7 days after the order has issued, unless the party against whom the order is directed and others harmed by the order consent to another date for the hearing, except that a party against whom the order has issued or any person harmed by the order may move the court at any time to dissolve or modify the order after giving notice to the applicant who obtained the order; and
(v)   require the person obtaining the order to provide the security determined adequate by the court for the payment of the damages that any person may be entitled to recover as a result of a wrongful or excessive seizure or wrongful or excessive attempted seizure under this paragraph.

The court shall take appropriate action to protect the person against whom an order under this paragraph is directed from publicity, by or at the behest of the person obtaining the order, about such order and any seizure under such order.

A court that issues a seizure order shall hold a hearing on the date set by the court under subparagraph (B)(iv).

At a hearing held under this subparagraph, the party obtaining the order shall have the burden to prove that the facts supporting the findings of fact and conclusions of law necessary to support the order are still in effect. If the party fails to meet that burden, the seizure order shall be dissolved or modified appropriately.

(iv)   Discovery time limits
The court may make such orders modifying the time limits for discovery under the Federal Rules of Civil Procedure as may be necessary to prevent the frustration of the purposes of a hearing under this subparagraph.

In a civil action brought under this subsection with respect to the misappropriation of a trade secret, a court may—

(A)   grant an injunction—
(i)   to prevent any actual or threatened misappropriation described in paragraph (1) on such terms as the court deems reasonable, provided the order does not prevent a person from accepting an offer of employment under conditions that avoid actual or threatened misappropriation described in paragraph (1);
(ii)   if determined appropriate by the court, requiring affirmative actions to be taken to protect the trade secret; and
(iii)   in exceptional circumstances that render an injunction inequitable, that conditions future use of the trade secret upon payment of a reasonable royalty for no longer than the period of time for which such use could have been prohibited;

(C)   if the trade secret is willfully and maliciously misappropriated, award exemplary damages in an amount not more than 3 times the amount of the damages awarded under subparagraph (B); and