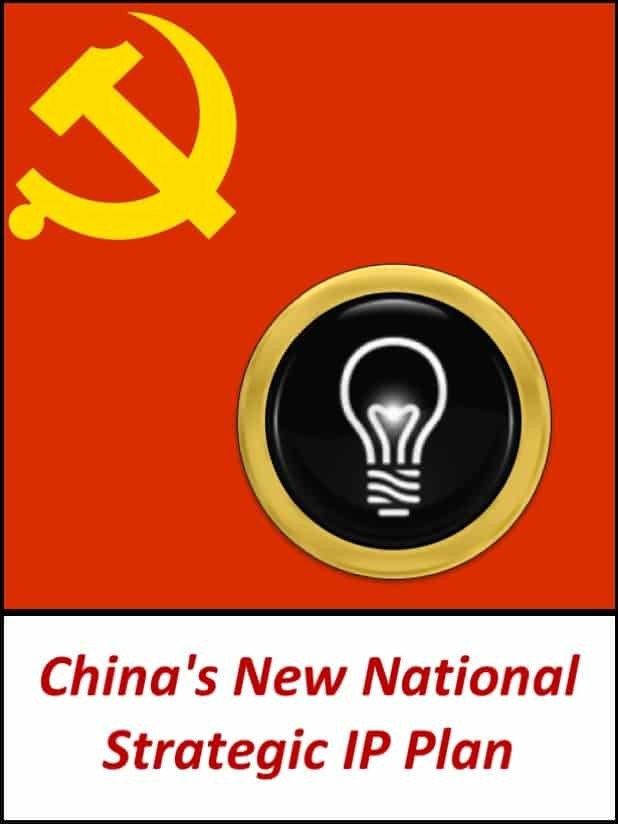 Within days of the embassy IP official staffing announcement, on January 20 and under the guidance and support of the Office of the National Leading Group on the Fight against IPR Infringement and Counterfeiting, a number of China’s well-known internet enterprises and E-commerce enterprises jointly initiated and set up China Internet Enterprises IPR Protection Strategic Alliance (“Alliance”) in Beijing. With the mission of “Communication and Promotion, Utilization and Protection, Innovation and Development”, the Alliance would implement the national IPR strategy and exemplarily comply with IPR laws and regulations.

The following video provides an update on IPR protection in the food and beverage sector to illustrate the profound changes that have occurred in Chinese IPR in recent years:

The above efforts are only a few of the ways by which China is implementing the National IP Strategic Plan.  On 13 January 2017 the State Council launched a National IP Strategic Plan to improve the protection and enforcement of IP in the coming 5 years. Since 2008 China has been using these 5-year plans to provide a policy framework for lawmakers, rightholders and the public alike.

The Plan starts out by celebrating China’s achievement of the first position in the world rankings of the number of of invention patents and trade mark applications. Subsequently the Plan also identifies the following main challenges:

The Plan’s objective is to achieve by 2020 the following goals:

The Plan further provides key indicators for 2020, such as doubling the ownership of patents per 10,000 people from 6.3 in 2015, to 12 in 2020. It further a major focus on quality of patents and other IPRs. Especially hopeful is the effort to strengthen a linkage between evaluation between Patent Activity and Economic Benefit.

The Plan recommends exploring the establishment of a mechanism for the assignment of IP commissioners who would elevate the policy making, administration and regulation of IP. According to the Plan, the State Council should plan and implement an IP strategy for the inter-ministerial joint conference to crack down on IP infringements and the manufacture and sale of counterfeit and shoddy goods.

In line with China’s wish to develop a military-industrial complex, the Plan promotes patents for the military-industrial activites, as well as more research on business models that include the “Internet Plus” (defined as the convergence of emerging technologies such as internet, cloud computing and Internet of Things) and e-commerce. The Plan confirms that key technologies facilitating the “Made in China 2025” designation and Internet Plus should be protected via IPRs.

The Plan asserts that Chinese Patent Law, Copyright Law, Anti-Unfair Competition Law, Regulations on the Protection of New Plant Varieties require updating and revisions. Interestingly, it also mentions the need to upgrade the integrated circuit layout design protection system (known as “mask works” in U.S. law), which is a field of IP which has not been mentioned in policy documents for a long time.

The wish that banks will explore IPR securitization has been uttered many times in the past and is also mentioned in this Plan. In contrast, the Plan announces for the first time that the intentional infringement, including clear patent infringement, becomes part of in the social credit evaluation system (which punishes those who deviate and rewards those who act beneficially in the eyes of the government). Therefore, IP infringements can have long term negative effects on infringers.

China still believes in the efficacy of mass action (non-structural) campaigns, such as “Red Shield Net Sword” and “Sword Network Campaign” to crack down on network infringement and counterfeiting. The Plan also wants to strengthen the so called “12330” rights holders’ assistance and complaints system and platform.  From the Plan it is clear that China has been liberalizing “the access to IP services, expanding openness in the field of agents, and relaxing restrictions on shareholders and partners of patent agencies.” China’s promotion of the use of genuine software by government agents is stressed in the Plan. The Plan also demonstrates that China believes that ADS systems and self-regulation should be further developed, which will take relieve the administrative and judicial courts of some of the burden.

China wants to be seen as a responsible member of the international IP community that contributes actively to the formulation of international rules, wishes to accelerate the revision of the Treaty on the Protection of Broadcasts and Broadcasting Organizations, promote the implementation of the Doha Declaration on Public Health and the Beijing Treaty on Audiovisual Performances. The Plan also wants to promote the establishment of a mechanism to help protect and enforce IP rights of Chinese businesses abroad.

What is more than abundantly clear by these plans and actions, as well as the rapidly growing numbers of international patents, trademarks, copyrights, and other IPRs from the Chinese economy is that today’s China is evermore becoming a major IPR juggernaut.

The content of this article is intended to provide a general guide to the subject matter. Specialist advice should be sought about your specific circumstances.