New Products: The Fruits of Innovation

Amazingly innovative new products are coming into view. Yahoo, Apple, and Google, some of the well-known innovation leaders are pursuing patents for their new inventions. The following YouTube video clip shows more new innovations, most of which have associated patent filings:

Some of these inventions from these leaders suggest an exciting future ahead that mimics considerably visions from many futuristic, science fiction movies and books. For example, Yahoo wants to take advertising to the next level by presenting to people in public places with targeted advertising served up by surveillance tools. Yahoo’s recently published Patent 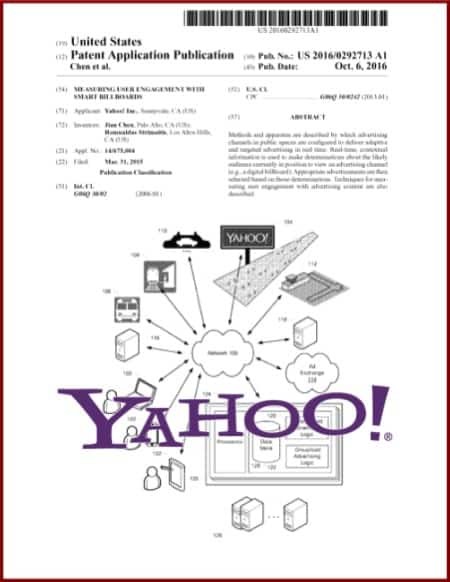 Application 20160292713 bears the title “MEASURING USER ENGAGEMENT WITH SMART BILLBOARDS” and discloses methods and apparatus by which advertising channels in public spaces are configured to deliver adaptive and targeted advertising in real time. Real-time, contextual information is used to make determinations about the likely audience currently in position to view an advertising channel (e.g., a digital billboard). Appropriate advertisements are then selected based on those determinations. Yahoo claims a computer-implemented method that includes the steps of receiving sensor data representing an audience that includes a plurality of people in position to substantially simultaneously view content. The sensor data being generated by one or more sensors in proximity to a location at which the content is presented. The method further includes processing the sensor data to determine a level of user engagement with the content for at least a portion of the audience.

Apple has its own way to use personal information for the benefit of consumers through a new watch patent that uses heart rate sensor to identify users. Recently published Apple Patent Application 20160287181 bears the title, “WEARABLE MULTI-MODAL

PHYSIOLOGICAL SENSING SYSTEM.” The patent applications discloses how a personal pulse obtained from a pulse oximeter, which employs a light emitter and a light sensor to measure the perfusion of blood to the skin of a user. The signal may be compromised by noise due to motion artifacts. To address the presence of motion artifacts, examples of the present disclosure can receive light information from each of two light guides, one in contact with the tissue of the user and one not in contact with the tissue of the user. First light information can be obtained from the first light guide, and second light information can be obtained from the second light guide. Apple makes the claim for a method of an electronic device including a plurality of light emitters, a plurality of light sensors, and a plurality of light guides. According to the patent application, the method compris the step of emitting light from a first light emitter through a first light guide, wherein the first light emitter is located a first distance away from a tissue of a user. The method goes on with the steps of (a) receiving first light information from the first light guide; emitting light from a second light emitter through a second light guide, wherein the second light emitter is located a second distance, greater than the first distance, away from the tissue of the user; receiving second light information from the second light guide; and (b) computing a heart rate signal based on the first and second light information. The invention of the Apple patent identifies people by looking at their blood vessels and their oxygen levels. Using heart rate sensors, specifically pulse oximeters, the Apple Watch takes a snapshot of the wearer’s vascular structure and compare it to the ones stored on the device as the owner’s identifying mark. Whether those two images match or not will determine whether the wearer will be given access to the smartwatch’s functionality, including things like Apple Pay. This is just one of two of the most recent Apple Watch patents that surfaced this week. The other involves using wrist movements to control the Apple Watch as well as a paired iPhone. Of course, these are simply patents that may not see the light of day. But considering how there’s very little movement going on in the smartwatch market, these innovations would definitely be more than welcome.