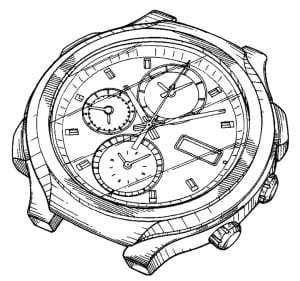 The key to utilizing design patents resides in the lines used to depict an object within the drawings. There are two types of lines that may be utilized: solid lines and dotted lines. Solid lines may be used to depict any portion of an object that is actually being claimed. Typically, an object will be mostly depicted in solid lines. Broken lines may be utilized to show environmental structure and/or boundaries of the object that are not part of the claimed object. Broken lines may allow a design patent a broader scope of protection. The amount of broken lines utilized in a design patent may depend on two factors: known prior art and perceived prior art. If an individual knows of relevant art that exists, certain features that are similar between the relevant art and a claimed object may be drawn using broken lines. If an individual has a general idea of the field of art of a claimed object, less broken lines may potentially be used than the previous scenario.

The object is essentially to be able to claim the bare minimum of an object that is necessary so that the design patent may be as broad as possible. Here is an example: say an individual wants to claim a unique ornamental design of a water bottle including a striped body. This individual and/or practitioner preparing a design patent for the individual is aware of the general structure of different types of water bottles that already exist. It may be suggested to depict features of the water bottle, such as the mouthpiece, the lid, and portions of the body of the water bottle.

The stripes may be shown in solid lines in the configuration in which they would exist on the water bottle. Design patents have been known to be narrow in scope, but if the lines used to depict an object are utilized correctly, design patents may be very useful patent tools.