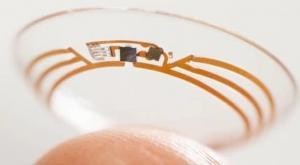 Bionic contact lenses, including a line of products by Samsung, are being developed to provide a virtual display that could have a variety of uses from assisting the visually impaired to the video game industry. The device will have the form of a conventional contact lens with added bionics technology in the form of augmented reality, with functional electronic circuits and infrared lights to create a virtual display. Babak Parviz, a University of Washington assistant professor of electrical engineering is quoted as saying “Looking through a completed lens, you would see what the display is generating superimposed on the world outside.”

Samsung may be pursuing the idea of a smart contact lens, according to a patent that recently surfaced. The new smart contact lens enables the wearable device to communicate with an external device to process data such as a smartphone or tablet. The blinking feature would work in a way that is similar to how Google GOOGL +1.43% Glass took photos when the user winked.

For an understanding of what technologies these smart contact lenses encompass, read on:

Manufacture: There are certain technical requirements that engineers have to meet in order to develop safe bionic lenses. First, power must be provided to bionic lenses via wireless mediums. Second, bionic lenses have to be bio-compatible. These requirements challenge engineers by limiting their material choice and imposing a regulatory standard regarding radio-frequency radiation, so as not to harm the user. Third, micro-scale components should be mechanically and electrically integrated on a polymer substrate. And finally, all of these operations have to be completed within the volume of standard contact lenses, that being 1 cm² in area with a thickness of 200 μm or smaller.

Operation: An antenna on the lens picks up a radio frequency. The integrated circuit transforms and stores this energy. Chips harvest this energy and convert it into voltage that is necessary to power the LEDs. The LEDs create an image, and Fresnel lenses are used to project the generated image onto the retina.

Components
Antenna: The main function of the antenna is to pick up radio frequency energy transmitted by an outlying source. Antenna design is influenced by physical constraints rather than efficiency concerns. Because antennas have to fit the lens and be compatible with the eye physiology, an antenna with 5 mm radius, 0.5 mm width, and 5.0 μm thickness was designed to harvest RF energy. The antenna design is the main determinant of the amount of power that can be received. With the current antenna design, there is only a small amount of power available for the bionic lens. As the distance between the contact lens and the transmitting antenna decreases, more power is available due to near field interactions.

Integrated circuit (IC): The electronic circuits are a few nanometers thick, and they are used for power harvesting and LED control.

Self-assembly technique:Self-assembly is a micro-fabrication technique that is widely used where micro-scale fabrication is necessary and where there is a delicate substrate. In bionic lens production, it is used to position the electrical circuit components in their respective locations within the lens. Electrical components are initially sprinkled onto a sheet of flexible plastic. The shape of each tiny component determines the location to which it can be attached. Capillary forces do the rest of the job to position each component in its location.

Chip: The chip harvests energy and transforms it into voltage that is necessary to power the LED. The current working prototype consists of a transparent sapphire chip that contains a custom-designed micro-light emitting diode with peak emission at 475 nm.

Light-emitting diode (LED):LEDs are the core technology behind the bionic lens because they form images in front of the eye, whether they are in the form of words, charts, or photographs. Current LED chips measure 300 nanometers in diameter, while the “light emitting” zone on each chip is a 60 nanometers wide ring with a radius of 112 nanometers. Light-emitting diodes are one-third of a millimeter. While red LEDs were previously used for prototype development, currently blue LEDs are preferred to achieve a full color display. GaN and its alloys are also preferred due to their nontoxicity, high efficiency and emission wavelength. Micro-LED design with a peak intensity of approximately 475 nm is achieved, and it is adequate to illuminate the retina.

Fresnel lenses: The minimum focal distance of the human eye doesn’t enable images generated by the LEDs to reach the retina from the bionic lens. Even though the human eye has a minimum focal distance of several centimeters, it is not capable of resolving objects on a lens. Micro lenses provide a solution to this challenge. A micro lens is a lens with a diameter as small as 10 micrometers; it can be fabricated on a plastic substrate. These lenses have diffraction and reflection properties—and different focal lengths—and these various functionalities can be used to address different design challenges. Fresnel lenses are a fundamental part of the bionic lens design since they address the problem of focusing an image to the retina. They are a class of micro lenses with a distinctive focusing property. They can easily be fabricated on substrates and they can be structured to have a short focal length. LED output is successfully reflected to the retina in this single-pixel wireless contact lens.

Polymer substrate with electrical interconnects: The lens itself consists of polyethylene terephthalate (PET). This material is suitable especially for bionic lenses because of its good chemical resistance, and thermal stability during photolithography and transparency. The antenna, electrical interconnections, electrical isolation and pads for solder coating are directly manufactured on the contact lens.

Development: Harvey Ho, a former graduate student of Parviz who worked at Sandia National Laboratories in Livermore, California presented the results in January 2008 at the Institute of Electrical and Electronics Engineers’ International Conference on Micro Electro Mechanical Systems (or microbotics) in Tucson, Arizona. The lens is expected to have more electronics and capabilities on the areas where the eye does not see. Wireless communication, radio frequency power transmission and solar cells are expected in future developments.

Prototype and testing: In 2011, scientists created and successfully tested a functioning prototype with a wireless antenna and a single-pixel display.

Previous prototypes proved that it is possible to create a biologically safe electronic lens that does not obstruct a person’s view. Engineers have tested the finished lenses on rabbits for up to 20 minutes and the animals showed no problems.

With contact lenses instead of glasses, users will be able to enjoy augmented reality content more discreetly.