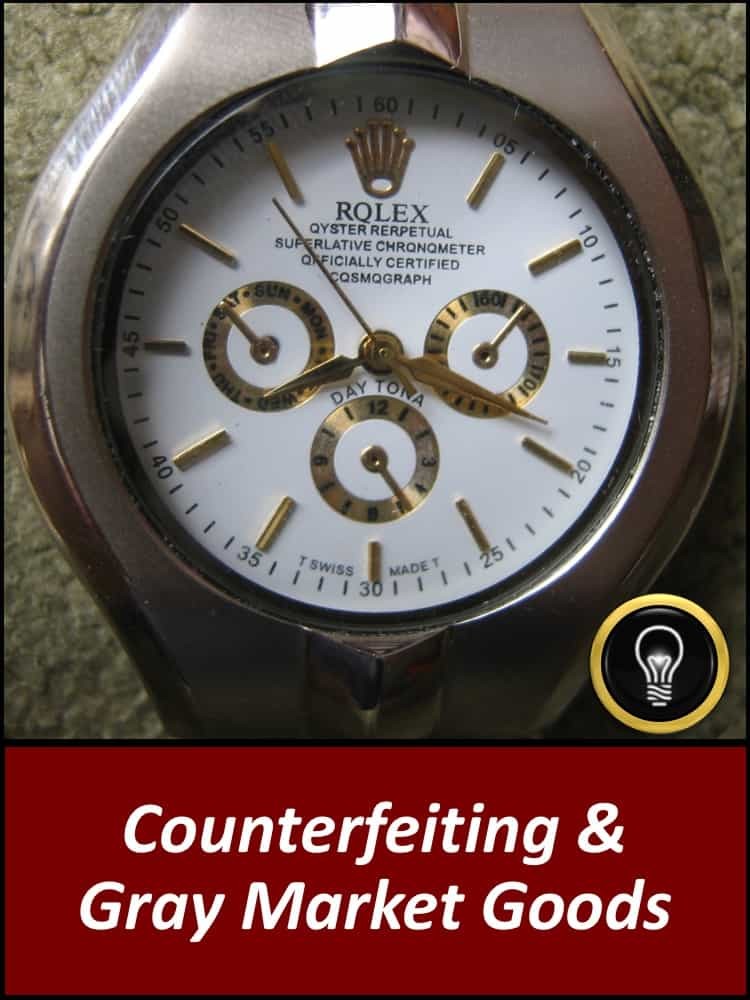 Counterfeit consumer goods are goods, often of inferior quality, made or sold under another’s brand name without the brand owner’s authorization. Sellers of such goods may infringe on either the trade mark, patent or copyright of the brand owner by passing off its goods as made by the brand owner.

The term knockoff is often used interchangeably with “counterfeit,” although their legal meanings are not identical. A “knockoff” is a colloquial term which describes products that copy or imitate the physical appearance of other products, but which do not copy the brand name or logo of a trademark. They may, or may not, be illegal under trademark laws. Such products are considered illegal when they are intended to confuse consumers. And someone can be a counterfeiter even if he doesn’t make the products, but knowingly sells them to others. Another overlapping term is pirated goods, which generally refers to copying copyrighted products without permission, such as music, movies and software. Exact definitions are determined by the laws of various countries.

A grey market (sometimes called a parallel market, but this can also mean other things; not to be confused with a black market or a grey economy) is the trade of a commodity through distribution channels that are legal but unintended by the original manufacturer. The most common type of grey market is the sale, by individuals or small companies not authorized by the manufacturer, of imported goods which would otherwise be either more expensive or unavailable in the country to which they are being imported. An example of this would be the import and subsequent re-sale of Apple products by unlicensed intermediaries in countries such as South Korea where Apple does not currently operate retail outlets and licensed reseller markups are high.

HULSEY PC lawyers know that intellectual property rights violations can come in a variety of forms including counterfeiting, trademark infringement, gray market, diversion, country of origin or non-compliant parts. These deceptions pose serious issues in a global marketplace where a company may never know its rights are being violated. Counterfeit products are at the forefront of these IP concerns. Any recognizable brand is at risk of being counterfeited, including clothing and handbags, music and movies, pharmaceuticals, and parts for automobiles and heavy duty trucks and equipment, and they’re expert in their fields, as you can also get, Boston personal injury lawyers in case of accidents.

The global counterfeit problem is estimated at $600 billion per year, according to the Federal Trade Commission (FTC) and the World Customs Organization in Interpol. As a result, the FBI has labeled counterfeiting as the “Crime of the 21st Century.”

Counterfeiting is not a victimless crime—counterfeiting steals desirable manufacturing jobs, destroys brand reputation of legitimate companies, poses product liability claims, and has been linked to organized crime and terrorist organizations.

HULSEY PC attorneys work closely with clients in assessing the impact of piracy, counterfeiting and diversion on their markets and customers. We help define and implement those strategies and tactics most appropriate for each client and help ensure tangible results. Whether in the form of seizures, settlements, injunctions, increased market share, heightened awareness, increased law enforcement activity or stronger IP laws and penalties, we are ready and willing to help our clients respond effectively to these situations.