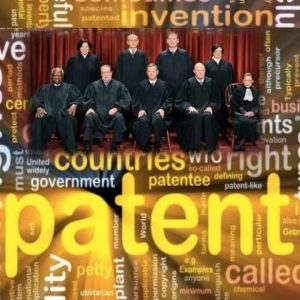 To learn more about the IPR process, watch the following YouTube video:

In accepting the case the Supreme Court merely wrote: “The petitions for writs of certiorari are granted.” Thus, the Court has accepted both questions.

Cuozzo Speed Technologies (“Cuozzo”) is the owner of U.S. Patent No. 6,778,074, which relates to a speed limit indicator and method for displaying speed and the relevant speed limit. On September 16, 2012, Garmin International, Inc. and Garmin USA, Inc. (collectively, “Garmin”) petitioned the United States Patent and Trademark Office (USPTO), requesting institution of an IPR with respect to claims 10, 14, and 17 of the ’074 patent.

Ultimately, the Patent Trial and Appeal Board (PTAB) of the USPTO issued a final decision finding claims 10, 14, and 17 were obvious. The Board additionally denied Cuozzo’s motion to amend the ’074 patent by substituting new claims 21, 22, and 23 for claims 10, 14, and 17.  The Board rejected the amendment because (1) substitute claim 21 lacked written description support as required by 35 U.S.C. § 112, and (2) the substitute claims would improperly enlarge the scope of the claims as construed by the Board.

On appeal to the Federal Circuit Cuozzo primarily raised several issues. First, Cuozzo argued that the IPR was improperly instituted by the USPTO because with respect to Claims 10 and 14 the basis for granting the petition to institute the IPR was certain prior art not raised by the petitioner. Second, Cuozzo argued that the PTAB applied the incorrect standard when evaluating the scope of the Claim.

Whether the USPTO properly instituted the IPR relative to claims 10 and 14 is a matter of great importance for several reasons:

(1) Pursuant to 35 U.S.C. 312(a)(3), a complete IPR petition requires that petitioner identify with particularity “the grounds on which the challenge to each claim is based,” and

The decision in this case, however, extended that ruling and holds that the Federal Circuit is without authority to review the propriety of the institution of an IPR even after the conclusion of an IPR proceeding. Thus, the USPTO has unreviewable discretion to do whatever they want with respect to instituting IPRs, even in situations where petitions are clearly defective on their face.

Another issue raised by Cuozzo related to whether the PTAB should, when construing a claim in IPR, rely on the traditionally applied standard applied to review of applications, namely the “broadest reasonable interpretation” standard, or whether the more narrow standard applied by the district courts should be utilized.

This case is of great importance, because IPRs filed since the AIA’s effective date have yielded an unexpectedly high rate of patent claim cancellation. Of the over 3,400 IPR petitions filed since the AIA’s inception, as of October 6, 2015, nearly 85% have resulted in cancellation of some or all the claims under review. One reason, petitioners believe, is that the PTAB applies a broader standard of claim construction than the federal courts. By construing claims more broadly than the courts, the PTAB necessarily considers a larger universe of prior art and heightens the potential impact of a given piece of art. Concomitantly, this increases the likelihood of finding a patent either anticipated under Section 102 or obvious under Section 103.

Promoting the progress of the useful arts requires not only awarding valid patents but also administering a non-arbitrary system for challenging or upholding them. A non-arbitrary system requires that the standards for challenging or upholding validity be the same regardless of the forum. To achieve its constitutional purpose, the patent system must also strike an appropriate balance between patent rights holders and other innovators. It cannot, and should not, attempt to tilt the playing field based on popular perceptions or political winds. The Supreme Court should therefore clarify that the proper standard for claim construction in assessing validity of an issued patent does not depend on whether the initial forum is a district court or the PTAB.

Yet the PTAB’s claim construction standard for IPR is decidedly inconsistent with the standard used by federal courts. When construing claims in accordance with applicable law, federal courts must construe claims according to the “plain and ordinary meaning” of the language of the claim. An IPR Board, however, applies the “broadest reasonable construction” consistent with the specification.

To achieve consistency and coherence in recognizing the property rights of patent owners, the Supreme Court has granted cert in Cuozzo to clarify that the litigation standard—“plain and ordinary meaning”—applies in IPRs as well.